Feeling anxious? Trouble sleeping? Find yourself fighting more with family and friends? You may be suffering from “Post-Election Stress Disorder” (PESD), or politics-induced anxiety caused by the recent presidential election. CNN claims that “mental health professionals around the country, especially those working in Democratic strongholds, report a stream of patients coming in with anxiety and depression related to — or worsened by — the blast of daily news on the new administration.” 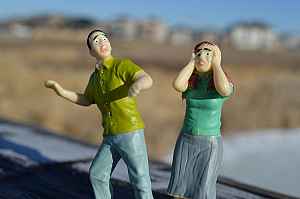 Before disregarding this as fake news, consider that the American Psychological Association (APA) recently released a report finding that stress levels (on a 10-point scale) have risen from 4.8 in August 2016 to 5.1 in January 2017. According to the APA, the uptick is the most significant increase since the survey was first conducted in 2007.

Some 66 percent of Americans surveyed cited stress over the future of the country, 57 percent claimed the current political climate as a major source of stress, and 49 percent noted the outcome of the election as having a significant impact on their mental health. Minority groups, millennials, and people with a college education had higher levels of stress about the election outcome.

“The fact that two-thirds of Americans are saying the future of the nation is causing them stress, it is a startling number,” Vaile Wright, a licensed psychologist working with APA’s Stress in America team, told The Washington Post.

While PESD is not formally recognized in The Diagnostic and Statistical Manual of Mental Disorders, some mental health experts claim it’s a real issue. In an op-ed for the Post, Maryland therapist Steven Stosny described something he calls “headline stress disorder,” writing that “For many people, continual alerts from news sources, blogs, social media and alternative facts feel like missile explosions in a siege without end.”

Licensed clinical psychologist Jennifer Sweeton also discussed PESD in Psychology Today; she claims a number of her female clients reported feeling anxious, depressed, and re-traumatized from past experiences. “Over the past three days I have received more emails and calls from female clients suffering from PESD-like symptoms than I have in the prior three months combined,” Sweeton wrote the week after the election.

Not everyone has taken to the unofficial mental health disorder. U.S. Rep. Brian Mast (R–Fla.), an Army veteran, criticized talk of the phenomenon as disrespectful to those with Post-Traumatic Stress Disorder in an interview with Fox & Friends. “There’s a big difference between being pissed off about things and what happens on the battlefield,” he said. “I have empathy for the stressors that are in people’s lives as a result of this election, but that doesn’t mean that there’s any real comparison to service members that have been targeted by snipers, that have been blown up, that have had to take the lives of their enemies…there’s not a comparison between the two, in my opinion.”

COVID- testing at our Burke office, call for appointment

PLEASE DO NOT LEAVE VOICEMAILS FOR APPOINTMENTS